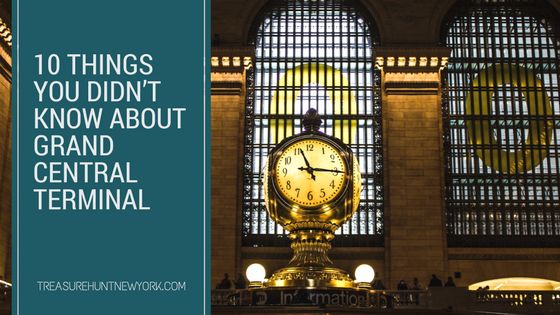 Grand Central Terminal is one of the most recognized train stations in the world. This historic world-famous landmark in Midtown Manhattan is not simply a transportation hub—it’s also a shopping, dining, and cultural destination with 60 shops, 35 places to eat, and a full calendar of events all under one magnificent roof.

Grand Central Terminal is one of the country’s great architectural achievements and New York City’s unofficial meeting place with thousands of people choosing to meet friends and loved ones each day at the opal-faced Main Concourse Information Booth Clock.

Here we spotlight some secret’s and less-familiar attributes of the over 100-years-old landmark: the 10 things you didn’t know about Grand Central Terminal.

When the station was built in 1871, it was actually called Grand Central Depot; it was rebuilt as Grand Central Station in 1900. Two years later, 17 people were killed in a train accident, leading to yet another reconstruction which finished in 1913. The new station was renamed Grand Central Terminal, because it’s a terminus for the Port Jervis, Hudson, New Haven and other lines.

Items turned into the lost-and-found office over the years have included an urn with cremated ashes, a basset hound, a turtle, a marriage license, a wooden leg and false teeth.

Acorns and oak-leaf clusters feature prominently throughout the building’s interior and exterior, including a brass acorn-shaped compass on top of the information-booth clock in the Main Concourse (the timepiece is estimated to be worth $10 million–$20 million). The symbols are an homage to Cornelius Vanderbilt, who financed the construction of Grand Central Depot; his family motto is, “From the acorn grows the mighty oak.”

The structure’s basement, called M-42 (because it’s the main substation below 42nd Street), is 13 stories deep. It was built in 1913 to house a power station that generated the building’s electricity. The original antique equipment is still held there, along with the modern machinery that electrifies the train rails using power from Con Edison.

Almost every movie that has been filmed at the station was shot on Track 34, because it’s one of the few platforms without columns. The track first appeared in color in the 1953 film The Band Wagon, in which Fred Astaire got off a train and danced his way up the platform. (The station’s first-ever movie appearance was in 1930’s Puttin’ on the Ritz, with Harry Richman stumbling through the station.)

In the 1920s, station attendants wore different color hats, depending on their jobs. “Red Caps” helped passengers with their luggage and “Green Caps” helped deliver messages for travelers. The practice doesn’t exist anymore at Grand Central Terminal, although Amtrak still has Red Cap baggage handlers at Penn Station across town.

From the 1920s to the 1960s, the 20th Century Limited traveled between Chicago and New York. At Grand Central Terminal, the staff would roll out a red carpet on Platform 35 for wealthy passengers such Bob Hope, Bette Davis and Bing Crosby.

In 1939, CBS opened its first television studios above the former waiting room, now Vanderbilt Hall, and Walter Cronkite anchored his first evening news broadcast from there in 1962.

The Main Concourse walls are made from artificial stone that had been molded and tinted to simulate French limestone, which is used in Notre Dame Cathedral, the Louvre, the Statue of Liberty’s base and the Empire State Building’s lobby. The cast “stone” was a cheaper alternative to importing the real deal, and also lighter on the building’s steel frame.

The constellations on the ceiling of the Main Concourse are reversed from how they actually appear in the night sky, because of the artist, French painter Paul Helleu, modeled it on a medieval manuscript that showed the constellations from God’s point of view.

If you are thrilled by these secrets, then get ready for more in our Scavenger Hunts in Grand Central Terminal.

Contact our sales team to find our empty spots for the next available adventure inside the Grand Central.