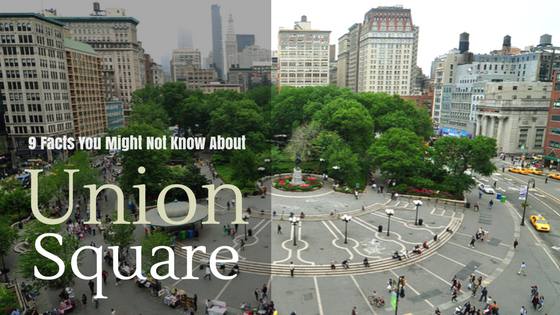 Union Square, one of New York City’s major intersections, has quite a reputation. It is many things: a lively rallying site, a place to eat lunch or play a vigorous game of chess, a shopping center, a destination for hip eateries, and more. If we go back to its roots, we would see that Union Square was the main center of rallies, protests, and political actions. So every New Yorker has something to connect with Union Square.

Here, we’ve put together some interesting facts about Union Square, which you might not know about earlier.

1. Union Square was once a Potter’s field.
Similar to Washington and Madison Square Parks, until 1807, Union Square served as a burial ground for the poor or unclaimed New Yorkers. As land values improved with the city’s growth, those potter’s fields have moved frequently around the other parts of the city. This particular area at 14th Street was once comfortably outside of town, but its proximity near Bloomingdale Road (the future Broadway) soon required its functions as a burial plot be transferred to other usable fields, like Washingon Square. The land here was transformed into the ellipse-shaped Union Place, a strolling park surrounded by an iron fence. By the 1830s, Samuel Ruggles would modify it further into New York’s toniest park Union Square, luring the wealthy who quickly built homes of ‘costly magnificence’ around it.

Are the bodies still there? Certainly not, given the park’s frequent renovations and the subway station right underneath.

2. Union Square is a true testament to the “Tale of Two Cities.”
In the mid-19th Century, the city began to expand towards the upper Manhattan, and the Union Square became one of the city’s “most sedate and exclusive suburbs, inhabited by the city’s wealthiest citizens,” according to the area’s 1997 National Historic Landmark report. Then, Broadway and Sixth Avenue played host to “Ladies’ Mile,” a high-end shopping strip complete with upscale retailers like Bergdorf Goodman, Lord & Taylor, and Tiffany & Co., and B. Altman; the area was also home to the first incarnation of the Metropolitan Museum of Art.

Still, while wealth congregated around the park, once the area was declared a public space in 1831, it became a hub of political activity, including labor union rallies, Civil War rallies, and demonstrations in support in women’s suffrage.

3. The First Labor Day Parade was held in Union Square.
Back to 1882, when the trade union and labor movement were expanding rapidly, labor union leaders decided to honor the American workers with a holiday. By this way, the first Labor Day took place on September 5th, 1882. Workers marched from City Hall up to Union Square, chanting and holding banners advocating for workers’ rights. The demonstrations were so successful that the union proposed the Labor Day to be held nationwide each year on the first Monday of September. The labor movement and its association with Union Square is also why May Day rallies in support of that movement are held in the area every year.

4. A full-sized U.S. Navy battleship hung out in Union Square for three years.
In 1917, the U.S. Navy built the U.S.S. Recruit as a publicity stunt intended to recruit more men to the Navy in the midst of World War I. “The recruitment numbers in 1916 had been a major embarrassment to the New York City mayor at the time, John Mitchel,” Scot Christenson, the director of communications at the United States Naval Institute in Annapolis, Md, told the Times in April. “So he realized that if he could not bring people from the middle of New York to a ship, he could bring a ship to the middle of New York.”

The ship (modeled after the U.S.S. Nevada) was constructed right in the middle of Union Square, and when it was fully operational, trainee sailors from Newport Training Station swabbed the deck, did the wash, conducted drills, took instructional classes and stood guard over the ship, just like Navy sailors on non-landbound ships. The ship also hosted social events, vaudeville acts, and visits by dignitaries, and served as a movie set for the film “Over There”. It was also used to sell Liberty Bonds.

The U.S.S. Recruit ended up bringing 25,000 recruits for the Navy, but by 1920 the war was long over, and the Navy decided to get rid of the ship. It was dismantled that year.

5. Union Square’s George Washington statue is the oldest statue in the city’s Parks collection.
The iconic statue on the southern end of the Union Square Plaza was dedicated in 1865, having been modeled by sculptor Henry Kirke Brown. The statue shows Washington on Evacuation Day in November of 1783, when Washington took NYC back from the British during the Revolutionary War. The statue served as a shrine of sorts after the terrorist attacks of September 11, 2001.

Brown is also responsible for the statue of Abraham Lincoln that also stands in the park. That one was dedicated in September 1870 and is located on the north end of the plaza. The park also boasts a statue of the Marquis de Lafayette, sculpted by Statue of Liberty sculptor Frédéric-Auguste Bartholdi and dedicated in September 1876; and a more recent statue of Mohandas Gandhi, sculpted by Kantilal B. Patel and dedicated in 1986. The Gandhi sculpture ended up in Union Square because of the area’s history as a flashpoint for political protest.

6. The very first Sherlock Holmes movie (of sorts) was filmed in Union Square in 1900.
In 1900, director Arthur Marvin filmed Sherlock Holmes Baffled at distributor Biograph-Mutoscope’s rooftop studio, located at 841 Broadway. The silent movie was the first to feature the fictional detective, who has since made quite a name for himself in film and television, though its 30-second runtime prevents some of the later deductive magic from coming through. You can watch it above.

The area was also home to the so-called “Slave Mart,” which, in the 1860s, referred to the unemployed actors who’d hang around looking for work from the casting agencies in the neighborhood. An actor out of engagement would stand around waiting, as the saying was, to “sign up ” for the next season. So soon as he had “signed up,” he would convey the tidings to his associates and then would be seen no more—until the next season.

Theaters started making their way uptown in the early 1900s, and in the 1920s and ’30s a number of large theaters popped up in Times Square, cementing it as the city’s central commercial theater district.

8. Two of Andy Warhol’s Factory studios were located just off the north end of Union Square.
Warhol actually had a number of Factory studios in the city over the years—his first was on East 47th Street, where he paid a hundred dollars a year in rent and threw wild and wonderful parties from 1962 to 1968. But from 1968 to 1984, he relocated to 33 Union Square West near East 16th Street, and then to a larger space at 860 Broadway. In 2011, the Public Art Fund commissioned artist Rob Pruitt to create an all-silver sculpture of Andy Warhol to celebrate the artist. That statue, dubbed “The Andy Monument,” stood outside of 860 Broadway from March 2011 to September 2012.

Do you want to discover more about the iconic Union Square? Come and join us at one of our Union Square Scavenger Hunt adventures, and find out more about its hidden secrets.