The Top 10 Secrets of Bryant Park 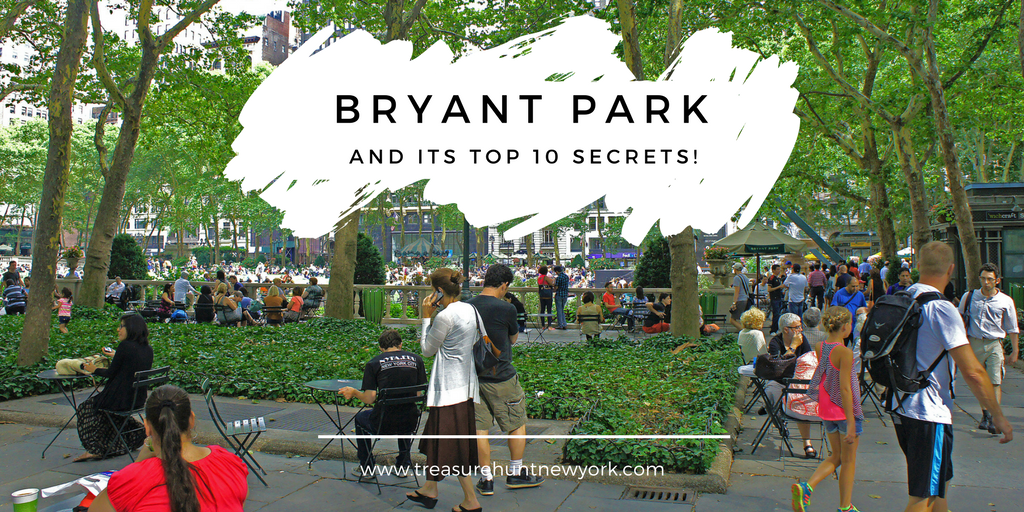 Bryant Park is the New York City’s most distinguished public space, and it has made a lot progress in its modest history. Here we reveal the 10 amazing secrets that lie behind the Bryant Park’s popularity today, as well as its history and architecture.

Big Brother is watching you!

Bryant Park management counts every one of its visitors twice a day, at 1 p.m. and 6 p.m. If you are wandering around during those hours, you will definitely be a part of a systematic data used for the park’s prospective improvements. According to the president Dan Biederman, Bryant Park is the most densely occupied urban park in the world. The daily visit counts also testify this, showing us that park’s daily visitors often exceed 1,000 people per acre, even on days without any special event.

If you made a wish in Bryant Park’s Josephine Shaw Lowell Memorial Fountain at least once, you’re not alone. Visitors toss an estimated $3,000 to $4,000 worth of coins into the fountain each year. Whether or not your wishes have come true, they are going to a good cause. Throughout the year, Bryant Park staff collect the coins regularly and support the funds used for park’s maintenance.

If you happen to visit the Bryant Park during summer, you would hardly recognize the same space in the winter months. When the winter time comes, the quiet, green lawns transform into an amazing Winter Village, just within two weeks. The management works around the clock to remove the sod and build the ice rink, restaurant, shops and more from scratch.

Two birds of a feather

Famed inventor Nikola Tesla spent much of the early 1900s feeding pigeons in Bryant Park. He must have fed thousands of birds, but one particular all-white bird allegedly aroused his interest. According to legend, Tesla said, “I love that pigeon as a man loves a woman, and she loves me.” As a way to honor Tesla’s connection to the park, New York City renamed the corner of 40th Street and 6th Avenue “Nikola Tesla Corner.”

Making stellar use of New York City’s limited space, the New York Public Library stores more than 40 miles of bookshelves underneath the Bryant Park Lawn. That corresponds to nearly 3.2 million books and 50,000 reels of microfilm. The two-level steel stack extension under Bryant Park, also functions as a structural element of the library building, buttressing the floor of Rose Reading Room.

Just like many recreation areas of New York City, Bryant Park was also serving as a burial ground for the NYC’s poor between the years 1823 and 1840. In 1840, the land became a part of the New York City’s jurisdiction. The cemetery was decommissioned and the bodies were moved to Wards Island in order to transform the space into the Croton Distributing Reservoir.

Before it was renamed, Bryant Park was known as Reservoir Square. The Croton Reservoir was a four-acre man-made lake, a crucial engineering innovation and the first freshwater supply carried by aqueducts from upstate New York to New York City. It was surrounded by 50-foot granite walls. Atop the walls was a public promenade, where visitors could take in views of a city in progress. The reservoir was demolished in 1900, but the remnants can still be seen in the New York Public Library courtyard.

The first skyscraper of New York

Back in 1853, the space that is now Bryant Park was home to the tallest building in New York City, a 315-foot octagonal wood tower called the Latting Observatory. The Latting Observatory, which beat Trinity Church for the top spot at the time, was built attached to the Crystal Palace, an architectural feat of iron and glass with a massive dome built in 1853. A million visitors later, both structures were abruptly destroyed in a fire in 1858.

After the Croton Reservoir was demolished, there was a failed petition to transform the site into an armory. During the Civil War, Bryant Park was used as an encampment and site for military drills for the Union troops, like many other of the city’s parks. The deadly Draft Riots of 1863 took place around Bryant Park, with the burning down of the Colored Orphan Asylum at Fifth Avenue and 43rd Street. Protesting conscription, white mobs roamed the streets, murdering and killing at will. By the time the police had retaken the city four days later, perhaps 2000 people had died. Today a statue of William Earle Dodge, father of Civil War Brigadier General Charles Cleveland Dodge, stands in Bryant Park. The elder Dodge was a New York congressman, founding member of the YMCA in America, and a proponent of Native American rights.

A Trap Door in disguise

While unsuspecting families play in the game area, a trapdoor lies underneath, disguised to look like a bluestone paver. This hides an enormous power vault, which houses the electrical supply sufficient to run the entire Winter Village, including the ice rink, warming pavilion, pop-up restaurant and holiday shops.

The best public bathroom in NYC!

It may seem trivial but the New Yorkers know how rare it is to find a clean public bathroom. In the northeast corner of Bryant Park, there is the most reputable public bathroom in the world. The reputation comes from not only it’s ornamented building and stone-tiled floors but also the cleanliness, the fresh flower arrangements, and the classical music on the background.

The arrival of the elevated train on Sixth Avenue in 1878 spelled the beginning of a long decline for Bryant Park, as a shadow was cast on the park making it less desirable. Robert Moses attempted to revitalize the park in the 1930s via a redesign that included adding hedges and an iron fence, which had the inadvertent effect of making it a haven for illicit activity. By the 1970s, drug dealing, prostitution, and homelessness were the defining characteristics of Bryant Park, which was nicknamed “Needle Park.” As the Bryant Park Corporation writes today, “By 1979, New York seemed to have given up Bryant Park for lost as an urban amenity, as well as a historic site.” But new programming in the park began in the late 1970s, the Bryant Park Restoration Corporation was created in 1980, and a redesign of the park was completed by 1992.

The Longest Expanse of Grass South of Central Park

Open space is a luxury in New York City and thanks to the longevity of Bryant Park as a public space and the dedication of so many to restore it, its open space is considered the longest expanse of grass south of Central Park.

In March 2015, The New York Times reported that a large 1950s-era glass mosaic mural by Max Spivak had been uncovered behind the metal panels of 5 Bryant Park, the building in which the Bryant Park executive offices are located. Within hours of the article publication, the mural was covered by a blue screen. The discovery of this forgotten mural made us wonder: what other gems of New York art are hidden?

Do you want to discover what other gems of New York are hidden?

Join in one of our scavenger hunts in NYC to find out the secret treasures of Great Gotham!